Definition of Terms- Features of Size: Regular and Irregular﻿

This discussion will delve a little deeper into these features of size to differentiate between how these critters can be classified and used. There is a fairly wide variety of opinion about this in the GD&T user’s universe so I will try to enumerate some of the translations and practices we all use. First of all we should start with our ASME Y14.5’s definitions. A regular feature of size is said to be “one cylindrical or spherical surface (or circular element,) or two opposed parallel elements (or parallel surfaces,) associated with a directly toleranced dimension.” Now we need to consider another term that affects the results of our discussion and that is “size.” Both the terms regular feature of size and irregular features of size actually depend on how the word “size” is defined. This is fairly straightforward.

By now many people get rightfully weary of all the words, and I care about that but can do little to simplify the discussion because I study this stuff a lot and what is and is not acceptable hinges on these definitions. And the truth is many people agree that the Y14.5 standard has gaps in how things are defined and can be translated. I suppose if everything in the standard was clear and everyone agreed on its contents they wouldn’t need new updates. So here we might stop discussing words for a bit and look at some pictures that are worth a thousand words. The following graphics show examples of what most people accept to be regular and irregular features of size.

Irregular features of size, type A 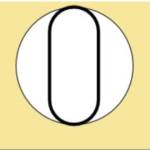 This is where I start to get off the bus. The definition in the standard says “may be contained by an actual mating envelope.” Well let’s look at the graphic on the previous page that shows an obround slot inside a circle. Isn’t that the same thing as above where this irregular feature of size, which is a collection of features, no it’s not a collection of holes or squares, it’s 2 radii or half cylinders and 2 opposing elements or planes, is meant to be a viable feature of size. We can contain it by contracting a circle around it  but the parallel elements or planes of its long sides are really not relative to the mating envelope, except that they are inside it. How about this collection of features? The concave example, if it can be, can be contained by a really weird shape of envelope. The convex example can be contained by an ellipse maybe? The first is not very conventional while the second is more conventional. Is this what the standards committee intended? I’ve spent more than a few hours Googling and looking for astute opinions on this subject because I teach GD&T and my students usually like static answers to the subjects we study. By static I mean ones that don’t wiggle around. So one thing I read about the subject of irregular features of size simply said Type A features are of a sort that can easily be constructed and then be contained in “envelopes that are spheres, cyl…yadda-yadda.” Things like triangles and symmetrical pentagons. While “type B irregular features of size” are everything else. I want to argue with this, but based on the definitions I can’t. The phrase “contained in other than a sphere, cylinder or pair of parallel planes” is succinct. If we accept that the word other rules the alternatives then other means every mating envelope that’s not a sphere, cylinder or pair of parallel planes, which includes all possible envelopes. So have we nailed it down? I can easily say No! There are going to be people who say that by the way they read the standard that some part of this is way off base. I’m hoping someone does because I don’t get a lot of response to the words I write for this blog and even words of disagreement will be welcome. The fact is that I think the wording in the standard leaves room for “wiggling.”

I’ll close with a comment I read last week made by an ASME “Senior Certified” member of our GD&T community of users. He said that he passed the Senior level exam on the first try, with only one mistake. Words with which he meant to impress, and I was.  He was recommending that prospective aspirants to the Senior Certification process study the ASME Standard not the vast array of engineers and specialists that give their opinions of what the standard says.  I can’t argue with that other than to say I consider myself to be well educated. I write a lot. I teach 6 college subjects at a specialized community college manufacturing program. I’ve written 3 novels. I work a full time job as a manufacturing engineer and mechanical parts and assemblies estimator. I know this sounds like a buildup to “you should listen to me because.” But it’s not. I have and use my well worn and dogeared copies of the 1982, 1994 and 2009 Y14.5 standards and one thing is abundantly clear to me. I have to read nearly every paragraph in them at least three or four times and often over a period of days to confidently digest what they say. I have to pour over diagrams and examples and I often copy a paragraph on page 34 and tape it beside one on page 284 so I can compare what they’re saying.  And following that I spend time wondering if I really understand what I’ve translated. So I’ll close with a thank you sent out to all the brave members of the standards committee and all the people out there that work hard to promote the adoption of this system we all use. These thoughts are my interpretation of the subjects discussed and I’ll bet I end up with more than a few new perspectives on them in the future.